HISTORY
The earliest mentioning of the name Lem or Lems, these two spellings are often used side by side, is found in Flanders and the South Holland “Zeeuwse” islands. Unfortunately these are incidental cases. In one case Lambert Lam or Lem was one of the leaders of a rebellion in 1284 against Guy de Dampierre, the Count of Flanders. Lambert was beheaded in 1284 for this.

In the middle of the fifteenth century the Lem family from Bruges (Belgium) distinguished themselves by their trade with Portugal, so that more data was recorded. Martin Lem travelled to Portugal around 1450 to manage his interests from Portugal. He had seven children with his girlfriend Heleonor Rodriguez (Roiz). These children were legitimated by King Alfonso of Portugal. Martin returned to Bruges in 1465, where he became mayor in 1467 and married Adrienne van Nieuwenhove. In Bruges there still can be found signs of this Lem.

Some children of Martin remained in Portugal and carried the name Leme. His son Antonio moved to Funchal somewhere after 1471, and his descendants were involved in the colonization of Brazil. In the same timeframe the weavers from Bruges settled in England. A few Lem branches claim that they are descended from these weavers, as this was told in the family from generation to generation, which is plausible, but not proven.

In 1590 Pedder Lem became a town clerk in Bergen (Norway). It was mentioned that he came from Bruges or Gent through Skane. The Birth of Pedder (Peter) was not found in Flanders yet. All Norwegian Lem’s descend from Pedder.
In the nineteenth century the great migration from Europe to America, Australia and New Zealand started.

Most Dutch Lem and Lems are grouped in three categories:

Within the Portuguese, Belgian and Dutch branches there are three coat of arms know.

Martin Lem(e) (I) in Portugal

The oldest coat of arms was found in Portugal where Martin Lem(e), a merchant from Bruges (Belgium), wore the coat of arms displayed to the left.
This Martin (I) was a merchant and provided financial services to the Portuguese king Alfonso V. Since 1464, Martin (I) was referred to as esquire. Probably in this period he got the permission to wear the coat of arms. He conceived seven children with his girlfriend Leonor Rodriguez.
Before he returned to Bruges, these children were legitimated by King Alfonso V in 1464.

Martin Lem (I) in bruges

Until recently it was thought that this Martin Lem in Bruges was the in 1464 legitimated son of Martin Leme and Leonor Rodrigues.

But new research in the archives of Funchal, Bruges and Lissabon indicated that it is more likely that Martin (I) left his girlfriend and their daughters behind in Lissabon and returned to Bruges around 1465. His sons, under which his son Martim Leme (II) lived for some time in Bruges but returned later to Portugal. During his stay abroad Martin (I) stayed citizen (poorter) of Bruges. In Bruges Martin was fully accepted, given that he quickly filled many important positions after his return and in 1467 married Adrienne van Nieuwenhove, scion of a notable family in Bruges. There exists two portraits of Martin (I), where also his coat of arms is displayed. The portraits were created long after his death and it is believed that a portrait of Wulfaert van der Burch was the model for these portraits. One portrait was in the collection of Rapaert the Grass, but this collection is no longer traceable, the other portrait is displayed in the Museum “de Potterie” in Bruges.

Why Martin (I) carried a different coat of arms in Bruges, a so-called broken coat of arms, and where the shells came from is unknown.

The Belgian coat of arms of Martin (I) was also carried by his descendants.
Remarkably the weapon was sometimes used mirrored.

Antonio Leme, son of Lem Martin (I) and Leonor Rodriguez (Roiz), was legitimated by decree of King Alfonso V in 1464, along with six brothers and sisters.
Antonio participated in various Portuguese expeditions and battles against the Moors. Like the expedition against and the conquest of Arzila (1471).
As a reward for his services he was awarded the right to his own coat of arms in 1471. Antonio is the founder of the Leme branch which settled on Madeira.
He was almost certainly the Antonio Leme who in 1480 indicated to Columbus that he had seen 3 uncharted islands far west.
The offspring of Antoinio contributed to the colonization of Brazil, where today many descendants still live and where the coat of arms is still used.The coat of arms of this branch can be found on the fountain in the Praça do Imperio in Belem (Portugal).

On the portrait of Joannes Bonifacius Lem, who deceased in 1711 as provost of the “Onze Lieve Vrouwe” Church, stands also the coat of arms. Of this last weapon we have no image.

Father Leon Lem, the great initiator of the genealogical research of the Lem family, added the coat of arms to all his correspondence with the help of block stamp. 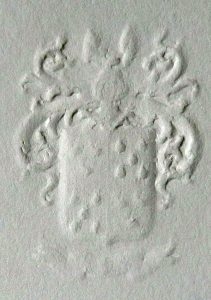 His cousin Fernand Lem was in possession of a signet ring, a photo of a print of this ring is below.

The heraldic designer William Goole recently redesigned the coat of arms.
The heraldic description of the weapon:“I and IV three black martlets on a silver field, II and III five golden shells in the form of a St Andrew’s cross on a red field.” 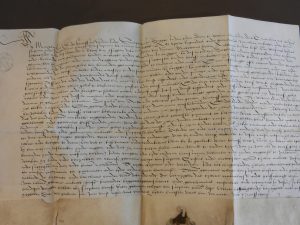 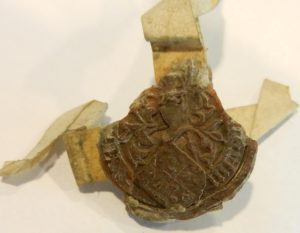 LEMCO suikerwerkfabriek b.v. (NL02-VII-i)
Confectionary factoryIn 1898 Theodorus Lemm bought an old confectionery factory in Rotterdam for his son Carolus Adrianus (Karel) Lemm. Karel had no knowledge of the production of confectionery, that is why they looked for a partner with manufacturing knowledge. The partner was found in Mr. Redder. Together, the factory became a large success. Known for the “LEMCO” lollipops and the “Anta Flu” cough drops.
Most products had the LEMCO logo on the wrapper, a parrot with a LEMCO-cap which said “LEMCO….lekkerrrr”. During the crisis in the thirties of last century the factory had a hard time, which they did not overcome after the second world war. The factory was closed, but their top selling products, “LEMCO” lollipops and the “Anta Flu” cough drops, are still produced at the NAPOLEON BONBON b.v. in Belgium.A more detailed history of the LEMCO factory is under construction. If anyone has information about or photographs of the factory or the Lemm family from Kralingen (The Netherlands), we would like to ask if they can send us copies or scans of this information.

Chemische Fabrik Urban & Lemm Charlottenburg (DE12)
Chemical factoryLittle is known about the history of the chemical factory “Urban & Lemm”. Fact is that by the end of the nineteenth century Otto Johannes Lemm (1867-1920) was the owner. Under his leadership the factory, which manufactured shoe polish and cleaning agents (e.g. “Blendol”) flourished. The company gave a kind of saving-stamps and to increase the sale of shoe polish they put a coin (‘Pfenningstuck’) in every fifth can. Otto Lemm build in 1907-1908 a capital villa with outbuildings in Gatow, designed by architect Max Werner. After the death of Otto in 1920 he was interred in the mausoleum, which was also designed by Werner, on the cemetery in Charlottenburg. In the mausoleum there is a mosaic image of the of the Lemm villa. The Lemm villa was between 1945 and 1990 the official residence of the British Commander. When the British royal family visited Berlin, they stayed at Villa Lemm.The son of Otto, Hellmuth Lemm (1901-1989) worked in the family business, with the advertising department of “Erdal” and as sales manager of the “Gummischufabrik Tretorn & Calmon”, before he took over the ROMIKA shoe factory in 1936.

Shoe factoryIn 1922 the shoe factory ROMIKA was founded in Gusterath (Germany). The company was named after the first letters of the names of the founders: ROllmann, MIchael and KAufmann. After the company went bankrupt in 1935, it was acquired in 1936 by Hellmuth Lemm. Hellmuth was the son of the Berlin manufacturer Otto Johannes Lemm, owner of the chemical factory “Urban & Lemm” in Charlottenburg. Hellmuth knew the shoe industry as an employee of his fathers company, and as head of the advertising department of “Erdal” and as sales manager of the “Gummischufabrik Tretorn & Calmon”. Under his leadership the company flourished. In the sixties of last century the company produced twelve million pairs of shoes per year. The son of Hellmuth, Bjorn took over the business from his father. in 1994, when a bankruptcy again threatened the family business, the company was sold to Swiss businessman René C. Jäggi. In 2004 the company again was sold to Josef Siebel GmbH.Romika GmbH still exists but there are no ties with the Lemm family.

From 1947 till 1961 Alphonsus Albertus Maria Lem works for Frans Lem office equipments in Amsterdam (The Netherlands). After which he worked in different places in the Netherlands before coming to Roermond.

In June 1984 he founds the Alphons Lem office equipment company, together with his son Daan Maria Lem.

In 1997 Alphonsus stepped out of the firm as he had reached the retirement age.
Son Daan still leads the family business.